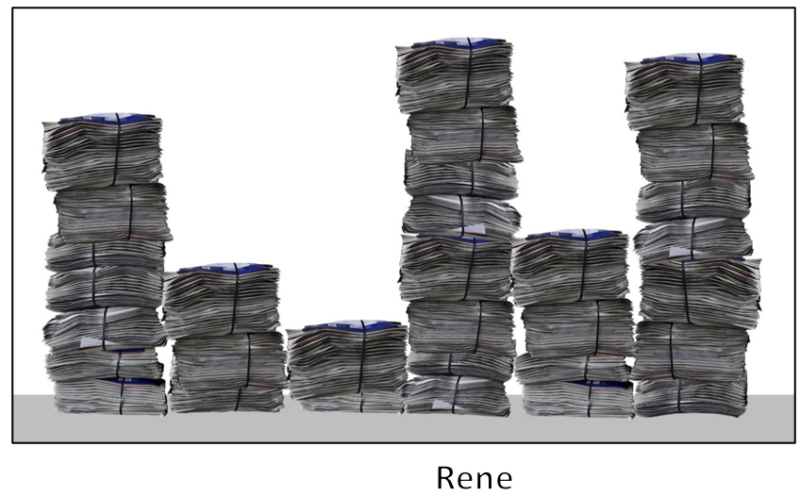 These piles of newspaper have been sorted for delivery. Rene delivers 200 newspapers a week. Estimate how many newspapers there are in each of the other delivery piles.

The approach to handling data in Sorting It Out (D1) takes the context within the data seriously. The need to organise data is the starting point for the emergence of a variety of statistical diagrams and measures. Learners are given genuine data sets and asked meaningful questions, like: What is a good age to become Prime Minister? What can the historical data tell us about this? Students are prompted to organise and to represent this data using strategies which make sense to them. By comparing what is the same and what is different about their representations, learners refine their lists and charts to establish the best ways of drawing bar charts, dot plots, tally charts and stem and leaf diagrams, as well as noticing the connections running between each of these representations.

The desire to compare one data set with another prompts a need to find a value which typifies the data and looks at its lowest and highest values. In comparing the number of bags of crisps eaten by a group of teachers and a group of students, students work with dot plots and pictographs to develop an intuitive sense of the mean and range.

Teaching materials for Sorting It Out (D1) 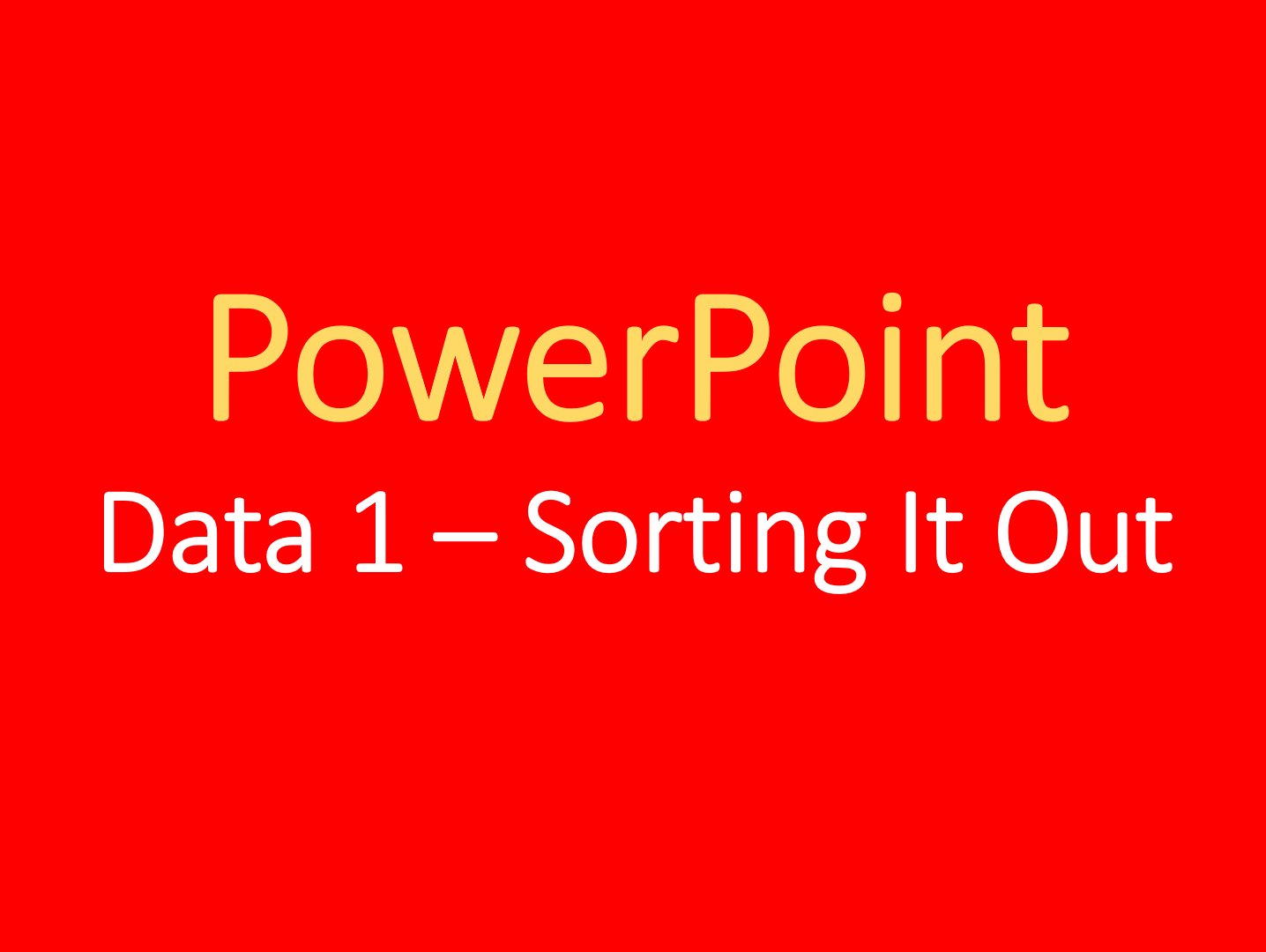 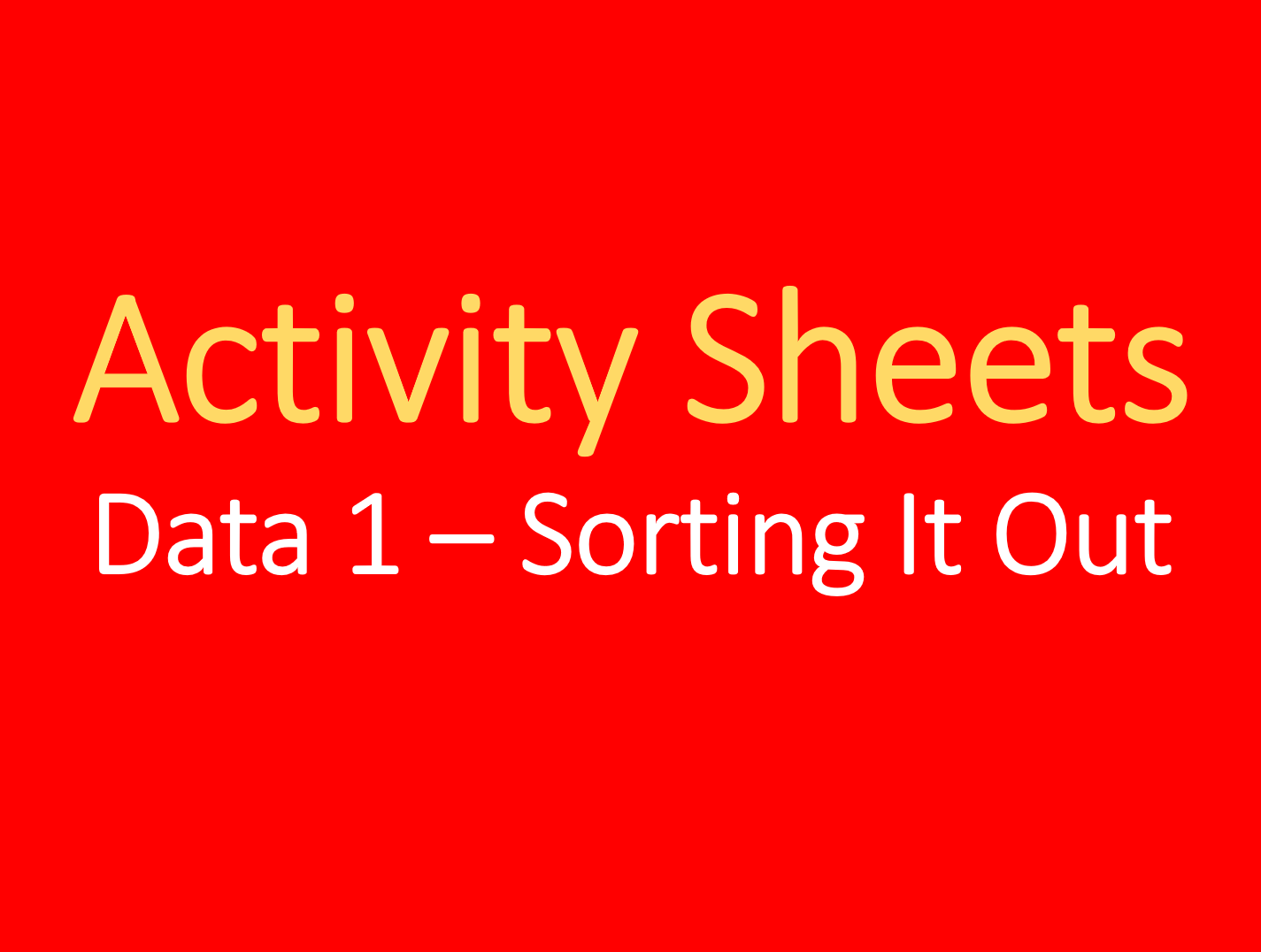 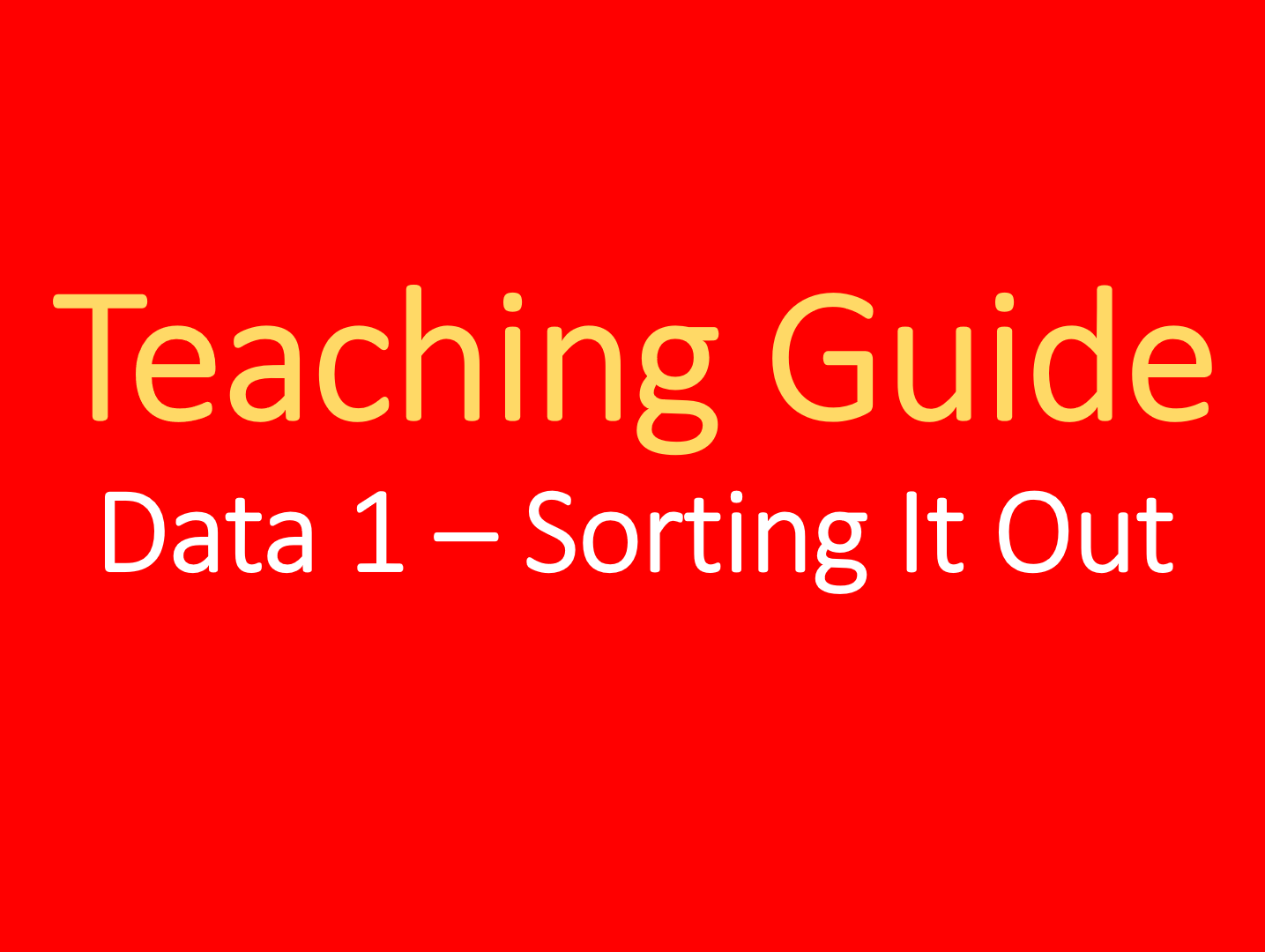 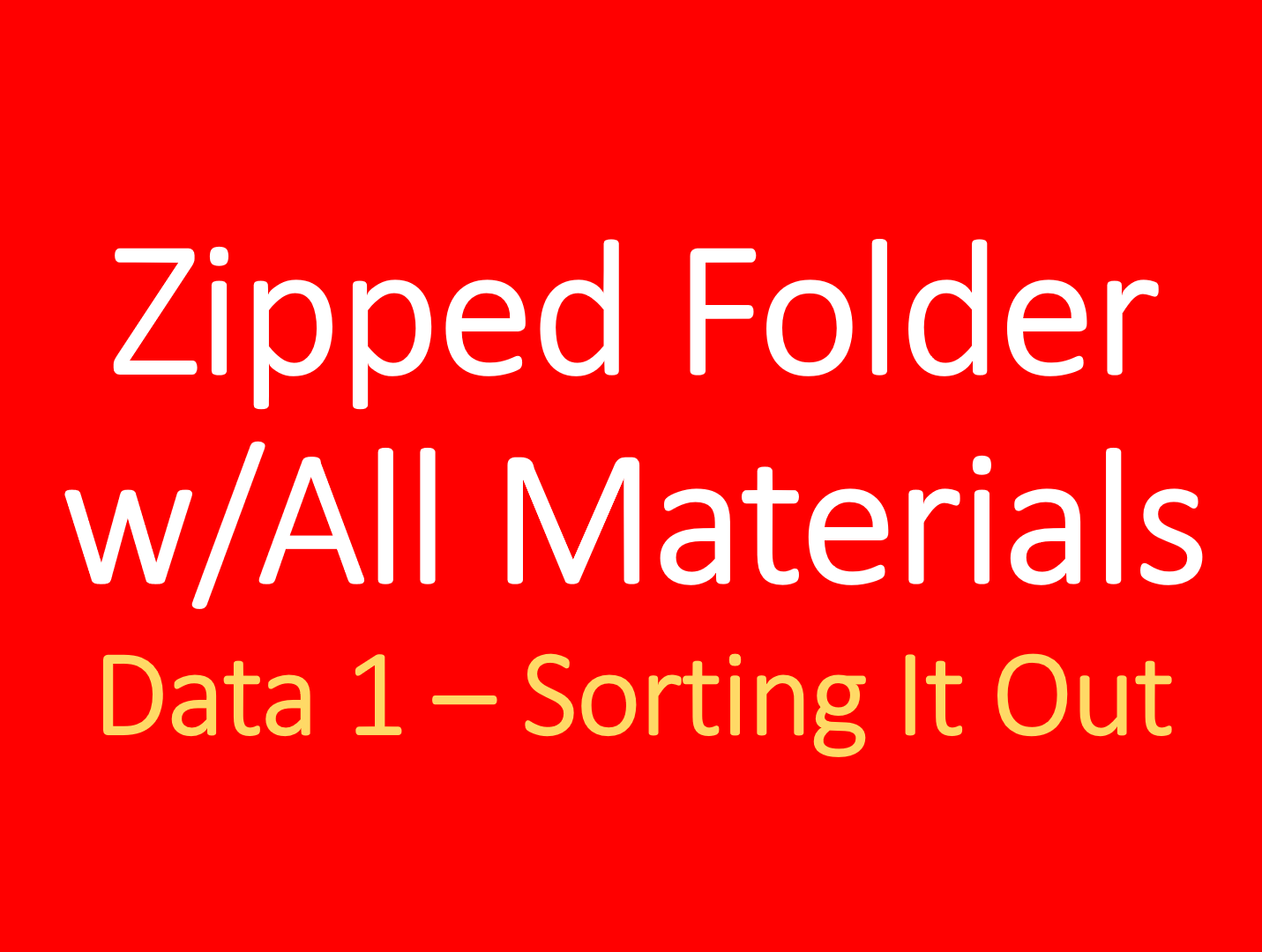 Overview of Sorting It Out

Lessons 1: Piles of Print
Students work across representations from the context of delivering newspapers; to a photograph of piles of newspapers; to a stacked bar chart; to creating their own bar chart. By comparing their charts, they establish some standard conventions for drawing a bar chart. ‘Fitting in’ strategies (using tracing paper or finger gap transfer) are again in operation as a means of comparing the relative sizes of bars. Students create a number scale from 0-200 and use a range of techniques in order to correctly place other amounts in relation to the 200. 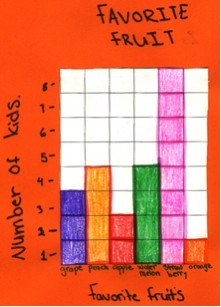 Students make comparisons between two different representations of the same set of data. The questions ‘How are they the same?’ ’How are they different?’ are posed as a vehicle for encouraging students to look across representations and to notice details. Students continue to work with ‘fitting in’ strategies when constructing bar charts. By comparing the shapes of two bar charts in the context of shoe sizes, students begin to talk about smallest and biggest sizes and the most common sizes. i.e. the formal techniques of looking at the range and the mode naturally begin to emerge.

Lesson 3: Bar Charts Q&A
Students work from data presented in bar charts to making meaning in words and sentences. They begin the process of designing meaningful questions for their partners and by marking their partner’s responses to the questions they designed, students begin to recognise the need to be precise, but also how questions can be interpreted in different ways.

Lesson 4: British Prime Ministers
Students study a fairly large data set referring to the age that British Prime Ministers came to power. They are tasked with developing their own methods for organising the data, to make it easier to study, leading to the introduction of another student’s attempt to organise the data; the dot plot. Students work on turning raw data representations (prime minister ages on coming to power; age at death; mother’s ages on having first child) into dot plot representations, with the purposes of making statements about the data sets. This leads students to engage with: (i) seeing where most of the data lies, (ii) considering what single values might best represent a set of data (iii) looking at extreme values for a data set (iv) comparing what a data set tells them with their expectations (v) comparing one set of data with another set of data. 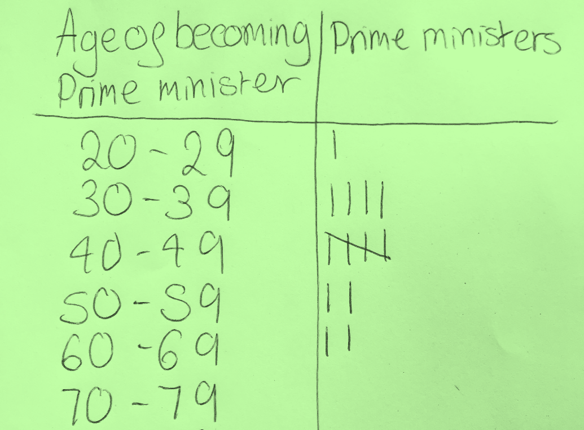 Lesson 6: England Managers
Students continue to work across a variety of ways of representing data. For the England Manager data, they produce a dot plot, a grouped bar chart, a stem and leaf plot and look for similarities and differences. They also consider what value typifies the age of an England manager. They predict how the age of their teachers and the ages of students in their school would look as a stem and leaf plot and consider the suitability of this representation to the particular context. They make dot plots and stem and leaf plots as a means of comparing the two sets of throw a welly data and even have the chance to generate their own throw a welly data. The device of asking students to predict where they might be within a set of data, or even to collect their own data, is an important part of prompting students to really engage with the context and the meaning behind a set of data, rather than simply seeing it as a set of numbers. In Q B7 students are asked to reflect on the various charts they have met so far. 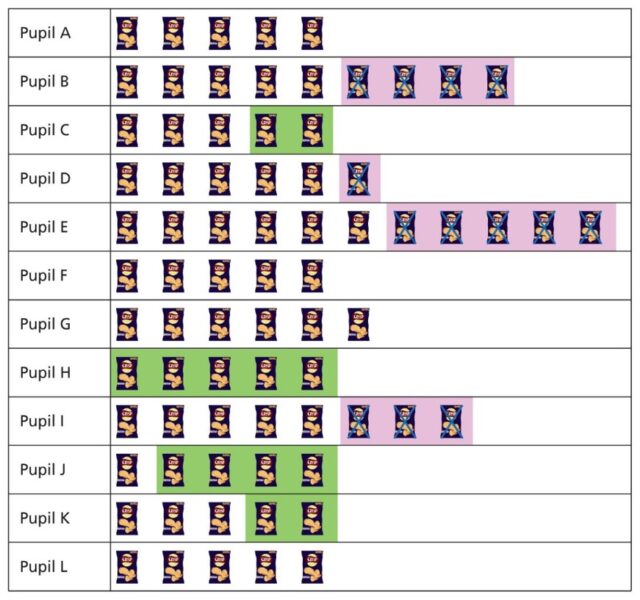 The context of students preferred snack choices is used to introduce a pictograph representation. In QC2 students consider how to re-arrange a pile of snacks as shown in a photograph into a pictograph arrangement. The use of a large data set in QC4, creates a need for a currency i.e. where one picture needs to represent multiple items.

Lesson 8: Teacher vs. Student Snacks
Students cut out pictures depicting Amazon’s Top 40 snacks. They sort the snack pictures into groups of their choice and stack the pictures to create both a bar chart and a pictograph arrangement and consider similarities and differences between these two representations. They choose two different ways to organise and display on: (i) children’s favourite after school pastimes (data which is non-numerical) (ii) time spent doing outdoor activities (data which is numerical).

Lesson 9: Eating Crisps
Students engage with the context of crisp eating in the UK by contemplating the truth of some newspaper headlines. They look at 2 pictographs showing the number of bags of crisps eaten per week by a class of pupils and the number of bags eaten by their teachers and consider who is eating more on average. Students approach this problem using a variety of strategies. In Question C8, students are directed to use Aisha’s strategy, which involves re-distributing the bags of crisps amongst the pupils to make it fair. Question C9 requires students to consider what the strategy of adding up the total amount of crisps and dividing by the number of people would actually look like if you had the people and their bags of crisps in a room. The underlying maths relates to ‘grouping’ v ‘sharing’ metaphors for division. (The act of sharing 62 bags of crisps between 12 people is very different to grouping which is essentially saying ‘How many 12’s can I fit into 62?’). The context of averaging out the crisps from the pictograph gives accessibility to different ways of thinking about division.

Lesson 10: On Average – The Mean
Students are introduced to the mean average as a way of balancing out the total amount fairly amongst the people. Through the context of distributing piles of multilink to make it fair for each person, students work with a range of strategies including: re-positioning cubes from the taller towers onto the smaller towers; breaking off the tops of all towers to leave a common core then sharing the broken off cubes fairly … so that all the towers reach the same level. 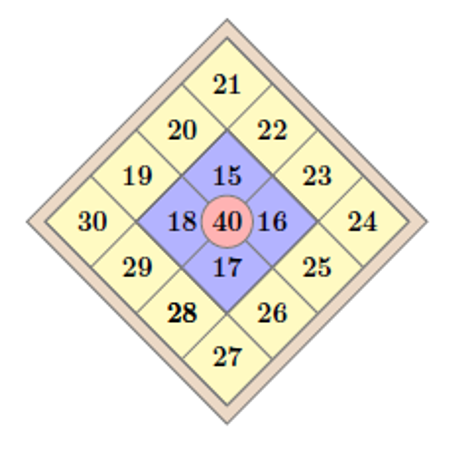 By considering how to keep their average score above 25 when throwing 3 or more darts at a board, students develop a variety of compensation strategies to balance scores, which are below 25 with scores that are above. They compare the scores of 3 people by representing the scores on a dot plot and use this representation to estimate by eye the average scores and to consider who is the most reliable/consistent. 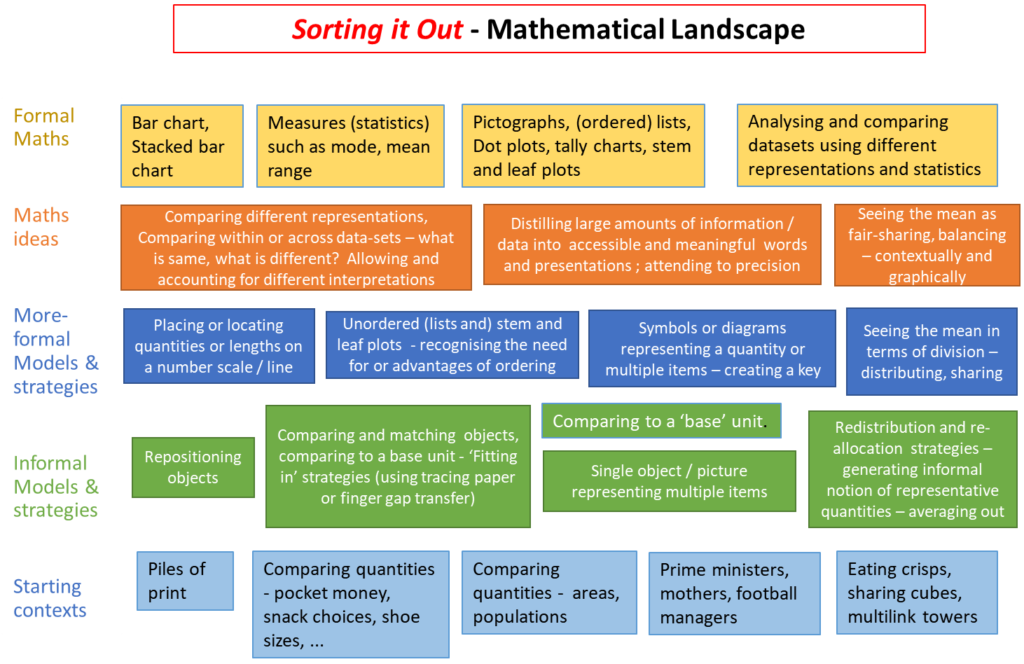 Back to Our Materials.